Adoption of renewable energy in developing economies is growing at about twice the rate of industrialized economies. Gone are the days when renewable energy sources were considered more expensive than fossil energy sources. Although there are many hurdles in relation to energy policy, development and deployment strategies, and poor (aging) electricity infrastructure being encountered in the developing world, the private sector, governments and civil society are joining hands to increase the proportion of renewable energy in Africa. Even in sectors unfamiliar with energy generation, trends are changing. A primary example is the rise of energy from large-scale biomass plants.

Biomass accounts for about 5% of total energy generation in Africa. Although there are thousands of smaller producing units (digesters) across Africa (less than 100m3), uptake of related energy generation technologies has been hampered by socioeconomic and other factors – but cutting down on initial construction costs and increasing the value of the resulting product could overcome these barriers.

Africa is welcoming the largest biomass power generation plant to be hooked into the national grid. Not only is it the largest, it doubles as Africa's first Anaerobic Digester (AD). The plant will be located in the Naivasha area of Kenya. It will also mark a debut in the use of General Electric’s Jenbacher gas engines in East Africa. Each of the two engines will generate 1.2MW of installed power and are expected to supply power that will finally be channeled to the national grid. Named as the Gorge Farm AD Power Plant, it is being commissioned by Tropical Power and is expected to supply additional power that Kenya so direly needs to support its expanding economy. The country is targeting an increased generation to 15GW by 2017 and is only generating 1.7MW currently. By displacing oil-generated power from the grid, it will cut down carbon emissions by 7,500 tonnes per year. 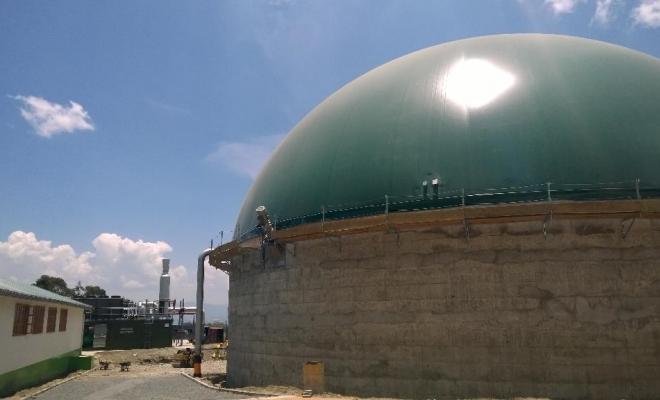 The company has entered into agreements with Kenya Power Lighting Co (KPLC) to sell power although the Energy Regulatory Commission is yet to rectify the Power Purchase Agreement - which is one of the challenges the firm is facing. KPLC is the sole mandated distributor of power in Kenya. It will be a first for Kenya as it constitutes the first issued power purchase agreement for a biomass power project. Snow Leopard Projects GmbH (SLP), a Bavarian biogas plant manufacturer from Reisbach is partnering with Tropical Power in this project. SLP has built 10 similar plants but smaller than this one. U.K's SAR Group provided control technology for the plant. According to the latest information from the company, the already commissioned plant is already supplying power to the farm and is expected to have increased capacity this month to be able to supply power to the grid.

Compared to conventional silage plants, biogas plants are proven by research to be up to three times faster and more efficient. The two-stage AD biomass power plant will be 30% more efficient according to information sent to CleanLeap by a representative of Tropical Power. The waste is first converted into biogas in the absence of oxygen and then this gas is burned in gas engines to produce heat and electricity. Johnnie McMillan, Managing Director of Tropical Power said the project complements large-scale framing in Kenya, a country that relies on Agriculture as an economic mainstay. It also complements  the food and beverage production agenda. About 15 cents per kilowatt hour will be saved through this plant.

Configured for cogeneration, the two-stage GE’s Jenbacher (J420) gas engines (which were supplied by Clarke Energy) will operate effectively at the high attitude of 2000m above sea level. Surplus heat that comes from the engines is recovered as hot water and then used to support process heating.

The project demonstrates that renewable energy can effectively replace the high costly diesel and fuels. But biogas power generation projects are said to incur high capital costs - how about a 5 million euro biomass plant with a pay-back period of 5.5 years? With 120 tones of organic waste being sourced from nearby farms, the plant is a demonstration that plant waste can be used for power generation.

Getting feedstock has always been one of the challenges of developing similar power plants in the whole of Africa, and so Naivasha was chosen as the best location being a center for production of flower and vegetable with a capacity to provide 100 tons of waste daily. The plant will use 50,000 tones of organic crop waste each year. The plant will also render at least 35,000 tones of nitrogen-rich matter as a by-product, and this will be used as rich natural fertilizer. This will cut down use of synthetic fertilizer used at the farm by 20%. Water hyacinth, which is an invasive plant taking over Lake Naivasha, for instance, could be used for power generation in this way, and that is where the two companies are looking to next for feedstock. Part of the power will be used to run the plant and some will be supplied to a farm (an 80ha vegetable Gorge Farm) supplying feedstock, as the rest is dispatched to national grid.

More biomass power in the pipeline

The power plant acted as an advance pilot for the  12MW Cummins' biogas plant coming up in Baringo, Marigat - Kenya. The $30 million 12MW Cummins power plant will utilize feedstock from Mathenge, a toxic shrub that grows in arid areas. The project has already started supplying power to the national grid after completion of a 2.4MW first phase. This power is enough to light up 8,000 households. Cummins is also running a 1.2MW biogas power plant in Zambia. Gentec Energy, British-based firm, is partnering with Cummins in this project.

Biomass power plants will not only help provide energy to those populations without access, but also will  reduce the need to collect wood and burn/buy charcoal. This translates to a reduction of energy expenditure if power from the plants is cheaper. Use of wood and charcoal is not only an expensive source of power and a health hazard, but is also associated with deforestation. In particular, it is expected to contribute up to 83% of deforestation in 2030, and a 4-26% increase in biogas production in 2030 could cut down deforestation by an equivalent of 9-35%. Biogas power generation can also help cut down carbon emissions by displacing fuel-generated power from grids.

As a solution for treating animal and organic wastes, they can help reduce spread of pathogens and disease incidences. For agricultural purposes, the residue from the power plants is bioslurry and can provide nutrients to improve crop production. Use of synthetic fertilizers an cause water pollution, and biogas by-products serve as organic fertilizers that carry no such effects. Biogas projects do have the challenge of requiring  large areas of land, which makes them a viable land use option in Africa for uninhabitabitable areas like  post-mining lands. In summary, many of these initiatives are providing benefits in terms of low-carbon energy generation, reuse of waste, effective land use and reduced deforestation - all brought together these make the projects very effective Cleanleaps.